What is Video and Game Design Animation?

We want our students to be ready for whatever comes after high school. CTEC’s Video and Game Design Animation students work with state-of-the-art software and equipment to produce 3D worlds, focusing on digital asset creation. CTEC students also learn how to film, direct, produce, write and publish live/filmed video. Our students are ready to start their careers with the following industry-relevant skills and knowledge:

Students in Video and Game Design Animation learn contextualized Social Studies and English aligned to the particular projects and skills they develop. Students receive coaching and resources to explore career options they may want to pursue directly out of the program or with continued education. Coupled with the experiences they have throughout this program, they graduate with a plan and the ability to adjust the plan throughout their career. With a foundation of industry-standard skills, rigorous Social Studies and English training, and the ability to interact with technical equipment, our students are ready to pursue their dreams and goals.

CTEC would like to introduce the Talented Video, Gaming, Design and Animation Team. 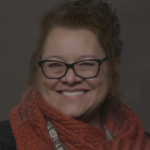 “Ever since I was a young girl, I loved to hear other people’s stories. After a while, I had my own stories to tell, and I found it was much easier to do that in writing. Stories have the ability to transport us to different places. They offer an escape, teach us a lesson, invite us into a new culture, and move us to feel things we may never have experienced before. The stories we write give us a voice and are evidence that we live and love and serve. Everyone has a unique story, and they are all worth being told. Being an English teacher gives me a front row seat to some amazing stories. I feel fortunate to be trusted with their safekeeping.”

Denise joined CTEC in 2017, teaching English to the Cosmetology and Video and Game Design Animation programs. Adding a Social Studies endorsement opened up new opportunities for the Design program. One teacher for two content areas allows the program to be more time-flexible, while encouraging the program teachers to organize the curriculum in such a way that academic and technical skills are focused in real-life contexts.

In addition to English, Denise teaches two exciting year-long Social Sciences courses: History of Film, Animation and Design and The Culture and Geography of Game Design. Both classes take into consideration the historical aspects of the industry, including the technological evolution that has taken place in order to bring our old stories into the modern world. 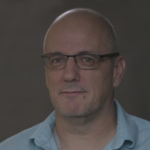 Graham moved to the United States from Ireland in 1995. He started his career in Florida working for the Disney Corporation in 1996. He returned to Ireland to work for a technology company, bringing his passion and knowledge for art into new markets the company was exploring. He came back to the U.S., Texas this time, in 2006, to work for another technology company where he demonstrated the complex processes of animation technology. He moved to Oregon in 2016 when he was hired by the Salem-Keizer School District to run the new 3D Design program at the Career Technical Education Center. He teaches two of the three parts of the track: Concept Design and 3D Digital Asset Creation.

He studied art in college but sought out classical art instruction and techniques while working at Disney. Graham’s expertise has helped him to work in film as an art consultant and teach the fundamentals in classical animation at the illustrious Disney Institute.

Graham spent the summer of 2020 working as a painter, reverse engineering the process of a 16th century master. He also added his talents as the motion graphics designer on a sequel to the film, Tim’s Vermeer, which is in post-production.

Throughout his life, Jack has been a creator and a storyteller. Although he studied- Psychology while attending Humboldt State University, his passion was always creating. Every elective class he took was related to art, design, theater or construction. His work career was equally diverse and every job, from a baker to a General Contractor, has been an opportunity for Jack to foster and develop his creativity.

After graduating from college and working in construction, Jack attended the Art Institute of Portland and studied Digital Film Production. Jack’s love for art and story took him to film sets and small production studios for the next 10 years, where he worked as a freelance editor and sound designer. After a small break to focus on family, he is now at CTEC to round out the curriculum of our 3D Design program.

Check out what the Video &amp; Game Design has been doing in class.